This story is about a road trip. For those of you who know me, you may think that someone else wrote that first sentence.  However, I did actually drive somewhere over 90 minutes. It was two hours from Atlanta to Greenville, SC to meet my two best friends for our semi-annual girl’s weekend. Kelly had flown in from NYC, and we were dilly dallying while waiting on Jenny to get off work. We had booked a great hotel, right smack dab in the middle of Greenville. Our plan was one day in the city and one in Jenny’s little country town of Easley, SC. The story takes place in the 27-minute drive in between the two.

Jenny, Kelly and I only see each other a few times a year. We have been friends for more than 30 years and haven’t much wavered (even when we lived on opposite coasts) from seeing one another at least once a year. When we do catch up, we tend to drink all of the wine. I mean all of it. Friday night started with rooftop wines and casual chit chat and led to a very late night/early morning of craziness and dancing. Somehow, I ended the evening in a deep conversation with a few Greenville City Policemen about prohibition and segregation. I will leave the details of this evening for another blog. I will, however, give you the right to infer how our heads were feeling when we woke up at 11:30 am the next morning.

After attempting to function through breakfast, we packed up and headed toward Easley. Jenny was driving, and Kelly and I were taking deep breaths through our noses and staring face to face with the air condition vents. This 27 minutes seemed like an eternity. Then it hit me! I knew exactly what we needed upon arrival at Jenny’s house. We needed, and I mean needed, Bloody Marys! The stretch right outside of the Greenville proper and Easley is a little “country.” Well, let’s be honest: it’s extra “country.” In preparation for the Bloodys, and the need to use the bathroom, we stopped at the first store with the little red circle on the sign indicating that they sold liquor. I walked in and the others stayed in the car.

“Good morning” I said to the gal behind the steel bar and Plexiglas protected cash register.

The lady looked at me for about 15 seconds before exhaling her Marlboro Red through the little circles that patrons were to speak into as a point of communication between the protective barrier. I continued to wait and she finally said, “can I help you girl?” That was a different reciprocation of salutations, but I took it.

On a normal day, I would have tried harder to engage and lead by social example, but I was social enough with the cops the night before. “I noticed you sell liquor here. I am looking for vodka and Bloody Mary mix, but I don’t see either.”

“Downstairs” she said while looking down at her magazine and puffing her smoke. I looked all around and realized I didn’t see any stairs. She never looked up, so I guess she could just feel my confusion. I did one more lap around looking for the stairs, and she muttered again “stairs outside.” Information that would have been nice, three laps around the smoke-filled convenience store. Sheesh! 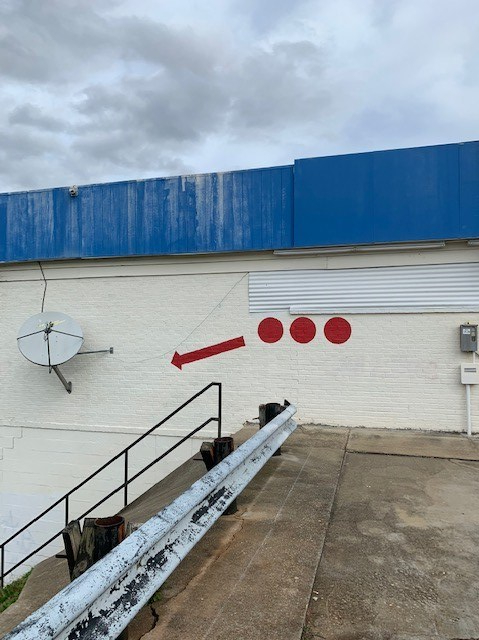 I walked out of the door and saw the stairs. I looked at Jenny and Kelly and said “Liquor Store is down here. If I am not back in 5 minutes, run!” This place was truly the sketchiest place I’ve ever been, but I was committed at this point. Upon turning the corner, I see a small window much like one where you would buy overpriced tickets to an average carnival. There were steel bars like upstairs and a piece of plywood with a note on it that said “Open. Nock” I attempted to add a “k” onto “nock” for their future visitors, but I just let it go. A bit of confusion set in about the knocking. I literally had to tilt my fist to get through the steel bars to be able to make physical contact with the plywood. I did exactly that. With as much pressure and force as I was able to do given the scenario, I knocked 3 times. Within seconds, the plywood started to jiggle. It jiggled and jiggled. It seemed as if he was trying to open or slide the wood to be able to communicate with me. With frustration, I heard “come to the door.” This is when I probably should have just scrammed. Instead, I went to the door which was under the stairs. I knocked, and the man opened the door. “What do you need?” he asked.

“Hi. I was looking for some vodka and Bloody Mary mix.” He looked at me like I had tentacles for arms and said “Margarita?” “No sir, Bloody Mary. You know the tomato mix?” He stared again. He turned back and shut the door nicely. He came back with a jug of cranberry juice and a handle of Popov Vodka. I looked at him and smiled because I realized two things. He wasn’t going to kill me, and he owned a liquor store but didn’t know what a Bloody Mary was. I told him that wasn’t it. He invited me in to look around. I agreed (dumb). As I walked into to dungeon of expired liquor and mixers, I realized this was simply the storage room of the M Mart where this experience started. All the products were scattered around on the floor. There was stuff everywhere. Not one single shelf. “Where the heck am I?” I thought to myself.  After a few laps around the dungeon, I came up empty handed.

I thanked my new friend, and walked out of the door. As soon as I shut the door, I looked at the area behind me, and no lie, there was a man and woman coming out of the kudzo field that bordered the store. They had literally crawled out from the underside of the kudzo. I looked, I blinked, I put a little pep in my step and I watched them come up to the man and ask to get in for some booze. There was a small verbal altercation, and as I watched from above, The Kudzo People walked away with a bottle ½ empty brown liquor. I wanted to help my new friend, but I decided that leaving was in my best interest.

I got back in Jenny’s fancy schmancy Lexus SUV and immediately felt like I was in a 5-star resort. Kelly removed her face from the AC vent and said, “that took forever and you have no Bloody mix.” I looked at her with flat affect and said “Go. Just go.” Jenny followed directions, and 10 minutes later we stopped at a very upscale liquor store near the Piggly Wiggly. I finally mustered up the words to recount this story. The owner said “you saw the Kudzo People? They have been there forever and go in and out of jail for robbery and assault. In fact, there was a full gun down in that store just six months ago. The Kudzo People weren’t involved, but the store closed down for a few months.”

I looked at my friends, hugged them and thought about how lucky I was. Kelly stepped up to the counter, and said “Mer, this round is on me.” We got to Easley, mixed some Bloody’s and sat on the kitchen floor reminiscing on our childhood and the crazy events of the previous 36 hours.

Until next time my friends, “Always clean your tray tables”.