I’ve come to accept that I am a magnet for strange strangers. As previously mentioned, if I am not in First Class, I am the very last to board the plane. The thought of standing in the tarmac for 10 minutes just to sit in the same seat I am going to spend the next 4 hours in makes absolutely zero sense to me. This morning I was excited to be on a common commuter plane in Delta Comfort. Typically this means a nice, quiet flight which is good for my to do list but bad for my blog material. Today proved me wrong.

With only two minutes before the door shuts, I board my flight from Seattle to Atlanta. As soon as I step on, I see my seat. On the aisle is a stereotypical Seattle dude- beard, trendy hat, tattooed wedding ring, black faded jeans that fit just a little too tight and a worn grey hoodie partially covering his short sleeved plaid button up collared shirt. Beside him, and soon to be beside me, is a man wearing bright blue loafers, dark jeans with light stitching (not age appropriate) and a mint green plaid shirt under a blue and black plaid sport coat- chaos from the closet for sure. I could see his little chest hairs poking out of his button up shirt. He was also wearing one of those germ prevention masks. To be honest, those always confuse me. Is he wearing it to prevent getting sick or is he sick and wearing it as a courtesy to those around him? Any mask-wearers out there know the answer to that?

I settle into my window seat and wipe down my area. I got a new backpack so I asked for a blanket to line the floor with so I could set my new bag on something cleanish and take off my heels for a few hours. He looked at me and said “well that’s a good idea. I just wear this little mask to stay free of germs.” When he spoke to me, he removed the mask. That alone confused me. Next thing I know, the lady behind me asks the flight attendant for hot water for her “witch’s brew”. I look back and the gal seemed ordinary. When the flight attendant returned she asked what was in that? The Witch responded loudly with the ingredients and went on to tell the whole plane that she always pukes on planes and this “witch’s brew” tends to reduce the chances of this happening. Gross. What in the world is going on on this plane? It’s 9:00 am on a Tuesday for Pete’s Sake!

Now, back to the Masked Man. We will call him that. The Masked Man was “that guy”. You know, the one who was flashing his Delta status all over the place while whining about not having a first class upgrade and seeming in shock that he was in a middle seat. Dude, you are NOT that big of a deal; none of us are. Anyway, back to the story.

For the first time in a while, I was in a row where we were all a reasonable size. We each fit well in our space; however, the Masked Man leaned way too far into my space. He physically had his whole shoulder across my chest. I leaned toward the window hoping my body language would act as a form of communication. He tried to chit chat removing his mask for each spoken word. I, respectfully, responded but with short words removing my headphones only to answer and not reciprocating questions to further engage. He finally got the point, I thought. For the next 3 hours, he simply stared at me. You know that kind of stare where you feel it, and when you peek over they awkwardly look away? Yeah, that kind of stare. For 3 hours.  Oh I did get a minor stare break when they served food. He spent 20 minutes eating one single sandwich and making that gross noise where you put your tongue on your teeth and suck in. He made this noise both in and out of his mask. GROSS!

The awkwardness continued. I needed to get up to use the restroom. He politely got up with me as well and decided he would go to the restroom too. Oh goodie, I was hoping to stand in line with him. He went on to tell me that he was headed to Ecuador. Mind you, he is a white 50 year old man. When I asked why, he explained to me that he lives there- illegally. His Visa ran out but they haven’t figured it out yet. After this conversation, he continued with why he was in Washington. At this point, I still have headphones in yet the cord is dangling because it is attached to nothing. A simple attempt to deter exactly what was taking place. The Masked Man was visiting his brother who is a wine enthusiast. They enjoyed five bottles of wine last night together. Beyond just telling me this, he went on to show me the wine rankings on his wine app for each of the five bottles the consumed (insert eye roll emoji here). I asked him if he was hungover. He said he wasn’t. I told him that was impressive. Out of his pocket he pulled out a small jar of cream. He said “it is because of this marijuana cream I used. I rub it on my head and temples and it keeps me hangover free. Want some? ” How in the world does one meet a 50 year old staring white man in a mask who illegally lives in Ecuador, wears conflicting outfits and uses (and carries in his pocket through the airport) marijuana cream to prevent hangovers? I can’t make this stuff up.

Until next time, Always clean your tray tables! 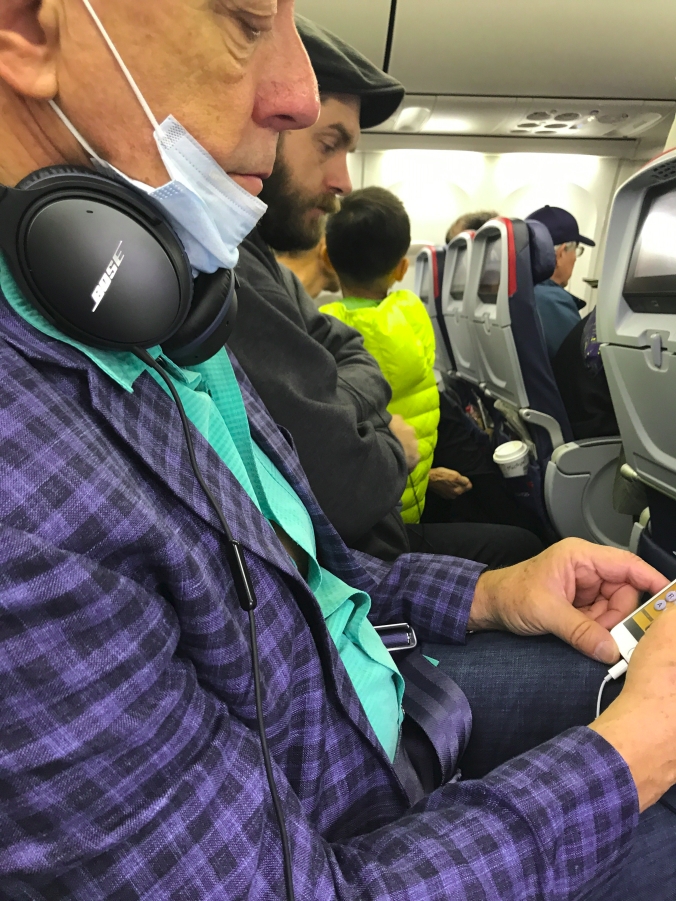 2 thoughts on “The Masked Man”