I always travel relatively “pretty.” That is not me saying I am pretty. That is me saying that I don’t travel in yoga pants and a t-shirt on business trips. On all my personal trips, yoga pants and a t-shirt would be formal. I do this with purpose. I like to think that if I am on a business trip and my bag doesn’t make it, I can survive feeling presentable and clean for 36 hours.  I woke up on a Tuesday morning in Austin around 5:00 am for my early flight. I hadn’t slept well, so I decided to snooze for 30 minutes and for the first time on a business trip, I just threw my hair into a messy bun, slapped on a pair of running shoes and covered up in a frumpy sweater. In the end, I was comfortable and a tad more rested than I would have been should I have gotten “pretty.”

I walked down to the plane, trying to wipe off the remnants of last night’s makeup from under my eyes. Ladies, you know what I mean; the little black dots of mascara that smear just enough to look like bags under your eyes from a distance. Yep- those are the ones.

I turned onto the plane and plopped down in 1C with my backpack. I started to wipe my entire space down with my wipes. C’mon don’t laugh, we’ve been through this, I kinda got a thing. While wiping down my area, my seat mate, we will call him 1D for now, but reveal his name shortly, asked me in an oddly familiar southern drawwwwwl, “do you always wipe EVERYTHING down?” I looked at 1D and said “Always.  I have extra wipes, or I can just do yours for you.” So, of course, I just started wiping his tray table down.  When I looked at 1D, I realized that under the plaid hat, perfectly mis-matched scarf and just enough different plaid to be famous blazer was Matthew McConaughey! He seemed as shocked to see me (well it was probably just an involuntary facial reaction to me wiping his space down for him) as I was to see him.  Oh, remember the first paragraph?  What are the chances that the one time, that one time I don’t travel pretty, I sit next to Matthew McConaughey?

I panicked and stupidly spit out “Do you live in NYC?” Part of me did this strategically and part of me did it because I was a bit, well a lot, shaky!  By asking this, I knew I was in control with my awesome “I am a plain ole human, selling software to make a living, raising a family on the outskirts of Atlanta, and you are a mega star that certainly doesn’t suck to look at” icebreaker. Also, at this point, I was only 99.99% it was the real him. Fortunately for me, 1D’s, we can now call him Moondog (more to come on that), brother called, and the last name ran across the screen. Bingo! I had confirmation.

As Moondog (yep, we are tight like that now, he calls me “The Prosecco Guzzlin’ Wipe Master”) was chatting with his brother, the rest of the passengers were boarding the plane taking secret shots of him and don’t you know I photobombed all of them with peace signs, tongue sticking out, funny faces!  I started texting everyone I knew trying to decide what I should do to follow-up my not so epic initial icebreaker, I needed something more Mer-like.  I brilliantly narrowed down my next moves, one of which was to pretend I didn’t know who he was and turn on How to Lose a Guy in 10 Days and subtly asking him if he has seen it, and came up with a plan.

When he hung up the phone, I gave him a few minutes then I tapped his shoulder and said “So about 40 people took secret pictures of you. I promise not to do that. Instead I am going to have 2 Proseccos (mind you, it is 7 am) and then just straight up ask you the questions my friends asked me to ask and grab a selfie. That work?” He giggled and said “I like your style. Let’s do that.” We both put on our headphones and did our own thing until breakfast arrived. After breakfast, we started chatting. I prefaced him with the fact that I needed 5 minutes of “annoying fan” time to ask him questions my friends were dying to know. I did this and learned about his favorite movies he made and why, where he keeps his awards, his role in the Lincoln commercials and how he would have responded to his role in InterStellar in real life. That last one was a doozie.  For the sake of his confidentiality, I won’t share all of his responses, but I will share one of them.  As we were talking, he asked me what I did for work. I told him and he literally straight up yawned!  Must admit, I did find that quite cute. Sometimes I love my job so much that I forget to realize that someone outside of my industry would truly fall asleep hearing about it. 😊

We chatted some more, some was driven by me and some by him and before we knew it, we had chatted all the way to NYC!  I was a bit star-struck at first but, in the end, I realized he was just a nice dude. He loves Texas, loves his job and taught me to have a new perspective on Miami, a city I have yet to find a love for.

Now for the Moondog part. One of his three favorite movies he ever made was The Beach Bum which comes out in March. In the movie, his character is “Moondog” and he is perfect! It’s more of a low budget film which he enjoys making as well. It’s about a stoner beach bum in Miami and stars Snoop Dog, Martin Lawrence and Jimmy Buffet. It’s truly the perfect cast. We decided to watch the trailer; however, I had misplaced my MerPods (AirPods). I was looking around everywhere and he said, “here, let’s just use mine.” Ok, maybe my job by description is a snoozer, but in this moment, it allowed me (the biggest germ freak in the world) to use Matthew McConaughey’s headphones, to watch his trailer of one of his favorite movies with him. I was winning this Tuesday morning!

We started to descend. We snapped a selfie. We got off the plane together and he got on his airport driver cart beeping thing, offered a ride to an older gentleman who was heavily invested in the athletic program at UT (not my UT, but the Texas one), and he waved goodbye. I simply said “bye Moondog” and we parted ways.

I got lucky that morning, and I felt refreshed knowing that even the most mega of stars are just amazing people. For those Matthew McConaughey fans out there, rest easy knowing that he is just as lovely in real life as he is on that big screen.  And boy is he PRETTY.  If you’re so inclined check out his foundation https://www.jklivinfoundation.org/ which does some extraordinarily cool things for kids. 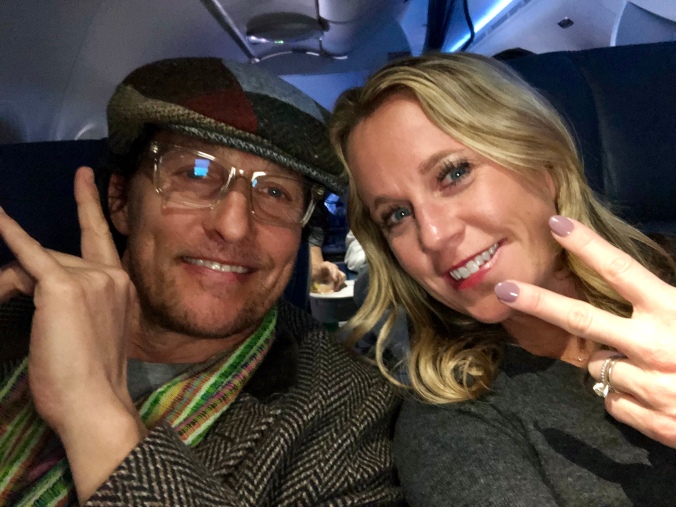